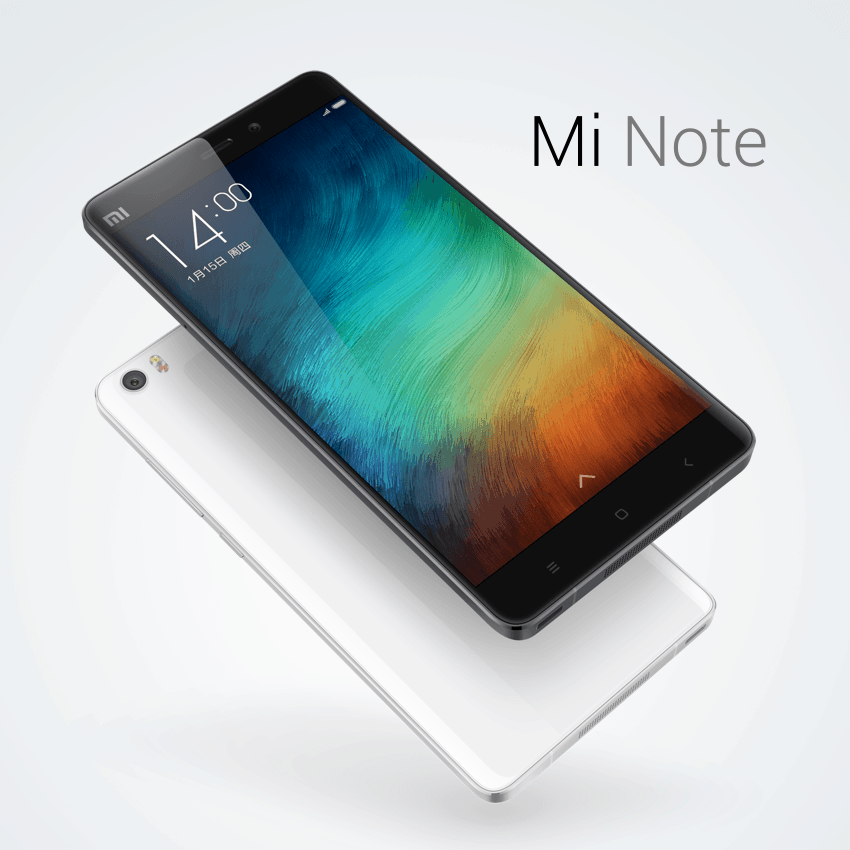 The Xiaomi Mi Note is out in Asia, and it is once again looking to sway iPhone users to a fairly priced (and fairly powerful) Android device. Xiaomi pitted the two phones against each other, and it looks like the Xiomi Mi Note comes out on top all things considered. With a premium build and powerful hardware, it is hard to see why anyone would pass this gem up. Well, its hard to see why anyone who can actually get it would pass it up.

The design on the Xiaomi Mi Note is top notch premium, to say the least. While there are certainly some similar qualities between it and Apple’s iPhone 6 Plus, it actually more closely resembles the Samsung Note 4. It is large, obviously, with a 5.7 inch display. The resolution is similar to the iPhone 6 Plus’s, which means that the Xiaomi Mi Note’s display pales in comparison to the Note 4. The Mi Note also has an all glass build except for a metal trim. This certainly separates it from its two competitors and only adds to the phone’s premium feel. Sometimes the glass smudges, but this isn’t a huge deal in the grand scheme of things. To be honest, though, I was worried about the all glass build. Apple moved away from this design after users shattered their phones time and time again. But, as this video depicts, the Xiaomi Mi Note is incredibly shatter resistant. Put simply, I was blown away by how durable this phone is.

The only thing I really don’t like about the Xiaomi Mi Note’s design is the speaker location. The speaker grille is located on the bottom of the phone, which dilutes the sound. I’ve said it before and I’ll say it again: front facing speakers should be an industry standard.

The Xiaomi Mi Note comes with its own MIUI, which is essentially the skin it puts over the Android interface. It is a little different and has a lot of unique features that would take some getting used to. In CNET’s review of the device, they recommend downloading and testing the UI on your current smartphone, and I personally agree with that sentiment. If you are going to invest in this phone, especially if you are importing it from overseas, you will want to make sure you like the interface.

The specs on the Xiaomi Mi Note are pretty spectacular. In a performance test (a test designed to measure the phone’s capability) it kept up with if not exceeded many high end phones on the market. In particular, the phone seems just as powerful if not more powerful than my own Nexus 6. It really is impressive, especially considering the phone is only retailed at $370 in the U.S. The biggest thing holding the Mi Note back is its compatibility with LTE networks. While it will work fine in many countries, it won’t necessarily get the top LTE speeds in countries such as the United States. This is certainly something to consider if you want to order the phone. If you are a user who wants the fastest speeds, you may want to wait and see if the official international model will address this issue.

The front and rear cameras on the phone are pretty solid as well. With a 13 MP rear camera (the same as the Nexus 6), the phone takes pretty excellent pictures. Colors contrast well, there isn’t a terrible amount of blur, even when zoomed in, and it trumps the iPhone 6 in pretty much every quality. The only thing the camera can’t do very well is night shots. In low light, the pictures turn our blurry and lose focus. This isn’t a tremendously big deal (who honestly tries to take photos in the dark?), but it is something that the iPhone 6 Plus can do acceptably well.

The battery life on the Xiaomi Mi Note is also pretty powerful. Based on other reviews, the phone can last a full day without a charge and is actually comparable to the Samsung Note 4. This is great news considering the Note 4 has one of the best batteries on the market.

In short, if you live in Asia (particularly China) and want the Xiaomi Mi Note, get it. The competitive price and high end specs definitely make this one of the best devices available at the moment. If you live outside of this area and are waiting for an international model, check to make sure the phone is compatible with networks in your country. Also consider the unique UI, which will take some getting used to. All in all, grab it if you can. You will definitely be getting your money’s worth.