November has been a pretty big month for tablets. With the launch of the rather impressive iPad Air 2 (as well as the not-so-impressive iPad Mini 3), it seems like Apple will once again dominate the market as the gold standard. Google, after launching its HTC-made Nexus 9, aims to topple the iPad Air 2 from its high place and become the new standard. Will it succeed? Or will the high price tag with some lackluster features hold it back?

Google, and by association HTC, did not strive to change the Nexus 9 a lot from the Nexus 7 tablet or the Nexus 5 smartphone. The Nexus 9 still sports the rubberized back found on the older devices; which is not a bad thing but people buying a device for $399 want to see aluminum finishing everywhere. The rubberized back of the Nexus 9 can leave smudges, at least for the black model, however, on the upside, it doesn’t slip off your hand at all and adds a very sturdy feel to the 8.9-inch device. Plus if you are in the habit of using a case or cover, then whether the device has aluminum finish or plastic finish or paper finish… none of that really matters.

Nexus 9 feels slightly thick because of the huge battery inside it but has an overall better finish than that of iPad Air 2. But note that you only feel the thickness if you are used to iPads.

The Nexus 9 is the first android device on the market to have Android Lollipop. It carries all of the features users are now expecting (for more on Android Lollipop, check out my overview here), but there are a few hiccups. According to TechRadar, the Hangouts app is hit and miss at best, but not according to me, the app works just fine and as it should. The device also doesn’t lack the SMS messaging feature as it did before with KitKat debacle… but if you have that issue, then either your device needs to be updated or you can get a fix. This however, is something Apple does exceedingly well with iMessage, and it is something Google should certainly address if it truly wants to compete with Apple.

The display is sharper than iPad Air 2 which oddly has the same resolution as Nexus 9. The IPS holds its ground very firm and offers crisp viewing from all angles but there have been reports of some minor back-light bleeding that takes away some form of quality. However, that’s not the case with my device. The contrast is quite good and the adaptive brightness feature from Lollipop has done well too. 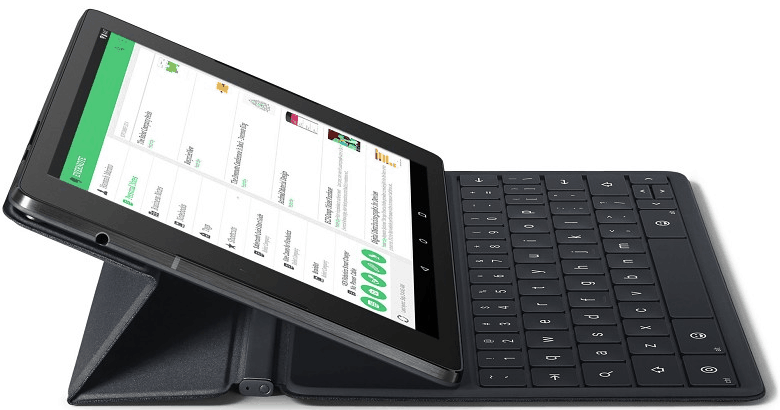 The Nexus 9 got it right with the speakers also. The tablet sports the same BoomSound speakers found on the HTC One M8, and they are located in appropriate places on the front of the tablet. This gives the audio for the Nexus 9 a certain crispness and balance that you don’t find on other tablets, especially the iPad Air 2.

When I went to buy my first car, my dad told me “It doesn’t matter how it looks. It’s what’s under the hood that counts.”

That little saying can certainly be applied to the Nexus 9, because it is actually a powerful tablet. In terms of processor speed, it still falls short of the iPad Air 2, but not by much. However, one must consider that the iPad Air 2 has a three-core processor, while the Nexus 9 only has a dual-core processor. This means that the individual cores in the Nexus 9 are significantly more powerful than the ones in the iPad Air 2. CNET has also reported that gaming graphics run significantly better than on iPad Air 2. The battery life also trumps the iPad Air 2, though the difference is minor – You can easily get 3 days of battery backup with Nexus 9 but then again, I use my Nexus 9 for small things such as emails, browsing, social media and maybe 30 minutes of a game or two.

Two disappointing things about the Nexus 9 are the missing microSD card slot and Qi-Charging support. To me expandable storage is a big thing (and to most other Android users also), so Google’s choice to omit this is surprising. And, to actually not have a device support the very cool and helpful Qi-Charging is simply mind boggling. Why would Google intentionally remove Qi-Charging feature when it helps everyone out so much is just odd.

But there is a fix for the microSD card slot and that is of course none other than the Micro USB OTG Flash Drives that are so readily available everywhere.

Nexus 9 is a solid device; the hardware is exceptional, OS seems to not just be pretty good but actually great, specs are very impressive, the price however, is something worth thinking about. The graphics rendering is great, but people may still want a lower price tag, Qi-Charging and added features like expansion slot and fingerprint scanning. The Nexus 9 had high aspirations, and in many ways it has met those aspirations. But, I would not go far and claim Nexus 9 to be an iPad killer, it has the potential but the tablet lacks some perks that people now want in their devices especially when they are paying almost as much. So a good alternative to iPad Air 2 but not a killer.