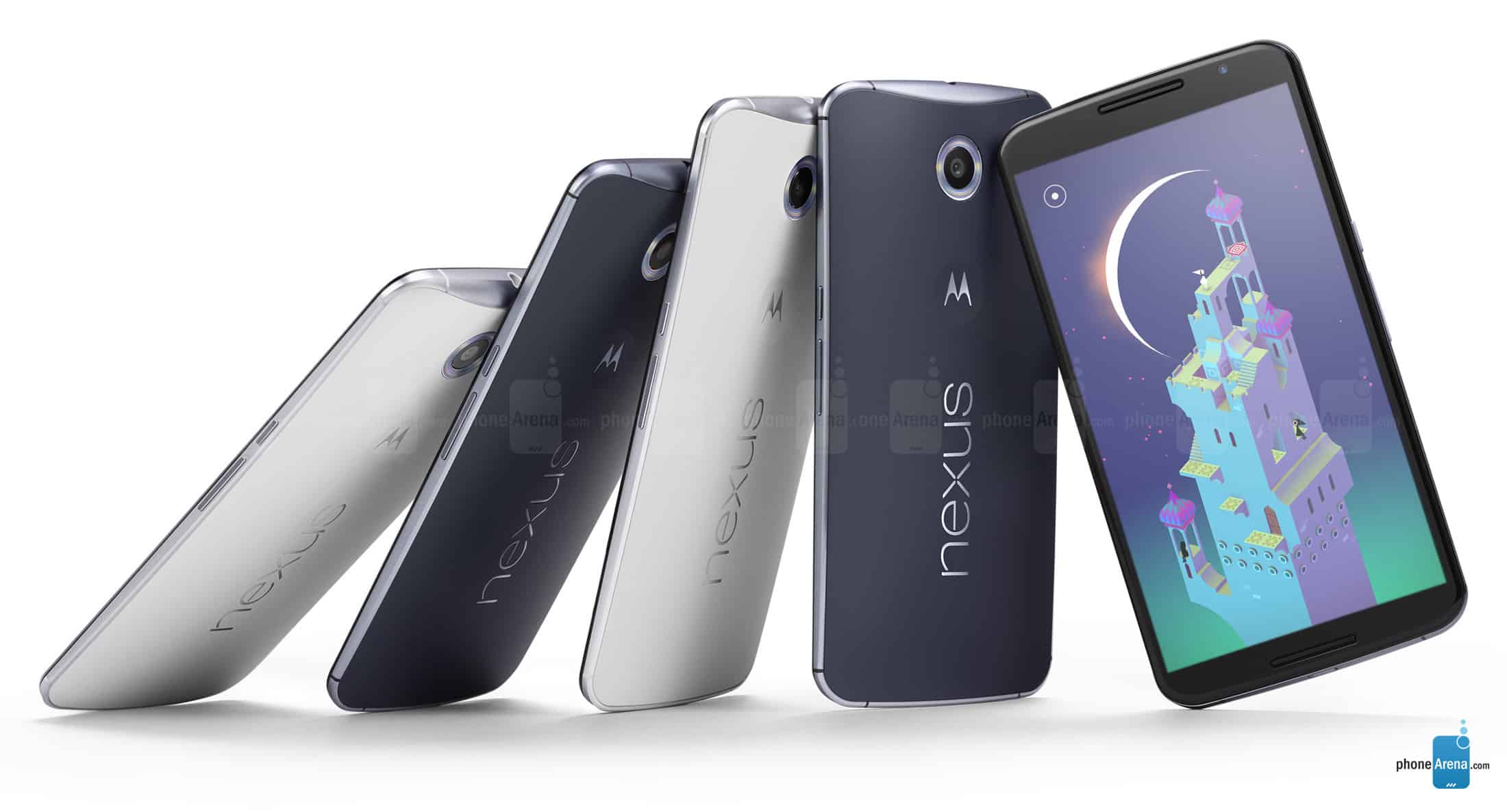 This fall and winter have seen the release of several very powerful smartphones. With powerhouses such as the LG G3, the iPhone 6 and 6 Plus, the Galaxy Note 4, and most recently the Galaxy Note Edge, the market is packed with phones and manufacturers competing to be the best. Now the Motorola Nexus 6 is in the field, and it has a lot of things going for it. Can it compete with the competition though? Or will minor design flaws and less-than-premium specs keep it from being a major competitor?

To be blunt, I love the design of the Nexus 6. Its smooth, rubberized backing feels nice to the touch, and the metal trim adds a sense of luxury to the whole package. It also has a curved back,which some have said make it difficult to hold. I found the opposite to be true. The curved seems natural, and it is comfortable to hold even in my tiny hands. The Nexus 6 also has massive a staggering 6-inch display. It was a massive jump from my iPhone 5s, but so far I couldn’t imagine going back to such a tiny screen.

There have been several criticisms of the Nexus 6’s design. I believe many of them to be misplaced and overly critical.  While the Nexus 6 does not have a full aluminum body like iPhone 6, it still sports a very premium design and feel.  The rubberized back and metal trim adds a nice feel to the phone, and in no way feels cheap to me.  CNET has criticized the backing in their review, saying “the plastic rear made crackling noises as we pressed and rubbed against it.”  I have not personally had this problem since I have had the phone, even after testing it myself.  It seems that the “crackling” issue is a case by case issue.  Regardless, the design is beautiful, and I think it far exceeds the plastic feel of smartphones such as the Galaxy S5.

There is one issue though.  With heavy use, such as heavy-duty gaming or video streaming, the phone becomes very hot.  Not warm, but uncomfortably hot.  It isn’t as noticeable now that I have a case on it, but it is slightly disconcerting feeling my phone burn in my hand. 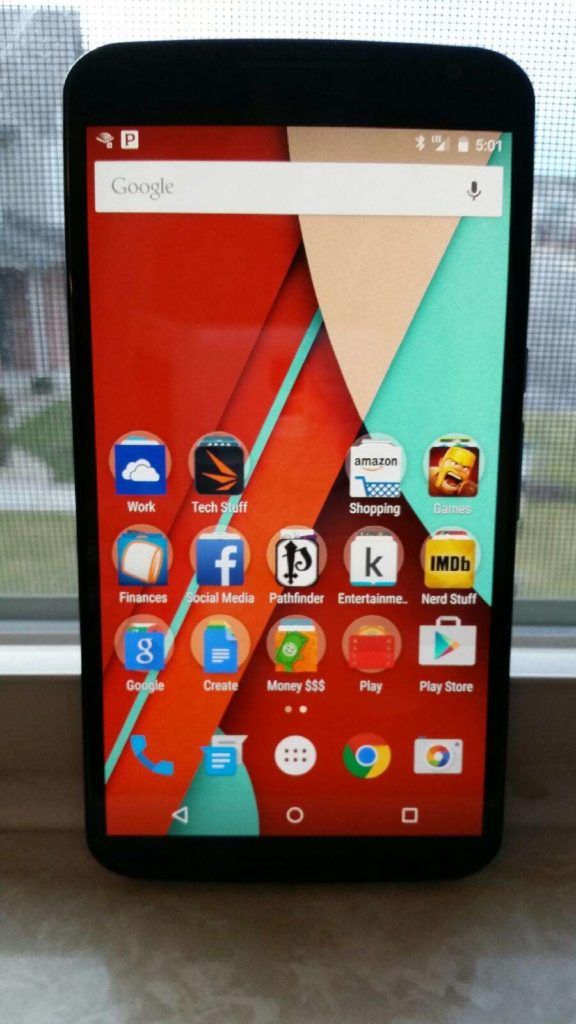 The Quad HD display is nothing short of beautiful on the Nexus 6.  Colors are crisp and clear, videos look incredible, and games run beautifully.  The 6-inch display is perfect for streaming videos and playing graphics intensive games.  It also makes reading eBooks on your phone a comfortable experience (something I have been enjoying quite thoroughly).  Compared to other premium smartphones, it blows the iPhone 6 and 6 Plus out of the water.  In technicality it falls behind the Galaxy Note 4, but it is such a slight difference that no one can tell the difference, even upon close inspection.

The Nexus 6 is also great because it is the first smartphone to run on Android 5.0 Lollipop.  We have talked about Lollipop before on TechVise, but here is a brief rundown.  Lollipop has introduced Material Design, a fluid and lively interface that nicely accents the use of the phone.  the crisp animations and lively interface really separates Lollipop from other versions of Android.  The notifications have also been greatly improved.  Notifications now appear on the home screen as cards, and can easily be pulled down from the top of the screen.  This is certainly an element pulled from Apple’s iOS, and it was a great choice on Google’s end to integrate.  It is also easier and more natural to access settings right from the home screen.  There is also a battery-saver mode, but we will discuss that later.

The camera on the Nexus 6 is also very impressive.  At 13 MP (megapixels), it has the same initially quality as the LG G3 and it is a higher resolution than the iPhone 6’s 8 MP camera.  It falls behind the Note 4 and Galaxy S5’s 16 MP camera, but it is still pretty impressive.  Auto-focus was probably the most noticeable factor.  To date, it is probably the fastest and most effective auto-focus I have ever used.  With a single tap, the camera easily focused on the subject of my picture, and it even balanced the light to give the photos a powerful contrast.  The Nexus 6 also has a host of photo editing features pre-installed on the device.  These features are pretty solid and made photo editing simple and fun, even for me (I am probably the least camera savvy person I know).

The battery life on the Nexus 6 ranges from pretty solid to okay based on what you’re doing with it. When playing graphics intensive games like TellTale’s The Wolf Among Us, the Nexus 6 gave me about three hours of battery life. That isn’t bad, considering the Nexus 5 gave me maybe an hour of video streaming.  When I was doing more casual things (web browsing, texting, reading, etc.) the battery gave me roughly eight hours of battery life, even with Bluetooth and GPS on.  This is pretty standard fare with high end smartphones, and doesn’t even come close to competing with the Galaxy Note 4’s battery life.  Battery saver mode does come in handy.  At 15%, it gives the phone an additional hour and a half of life.  That’s pretty convenient, though it isn’t quite as impressive as Samsung’s Ultra Power-Saving Mode.

This is where the Nexus 6 really shines, in my opinion. Without getting into too much detail (refer to my images to see the exact results of my performance tests), the Nexus 6 is a powerful phablet that is ideal for mobile gamers, movie addicts, or really anyone who is going to push their phone to the limits.  A 3DMark test puts the Nexus 6 as a top device for mobile gaming, following the Galaxy Note 4.  And a PCMark for Android test shows that it is one of the most powerful Android devices on the market, again just behind the Note 4.  The difference between the two, just like their displays, is marginal.  It isn’t something casual users are going to notice.

THE VERDICT – IS THE NEXUS 6 RIGHT FOR YOU?

As always, whether or not the Nexus 6 is right for you is a matter of preference.  The Nexus 6 is a little pricey at $599 in the US, but it is also $100 cheaper than other premium phablets, like the Note 4 or iPhone 6 Plus.  Even then, the steep price may be too much for some users.  The screen size may also be too big for some, though I didn’t have issues with it.  It fit comfortably into my small hands, and I adjusted to the feel of it in my pocket.  However, the Nexus 6 is not just a phone.  The Nexus 6 is pocket-sized computer to do anything and everything on.  If you are looking for a device designed to encompass all of life’s needs, then the Nexus 6 is the right option for you.