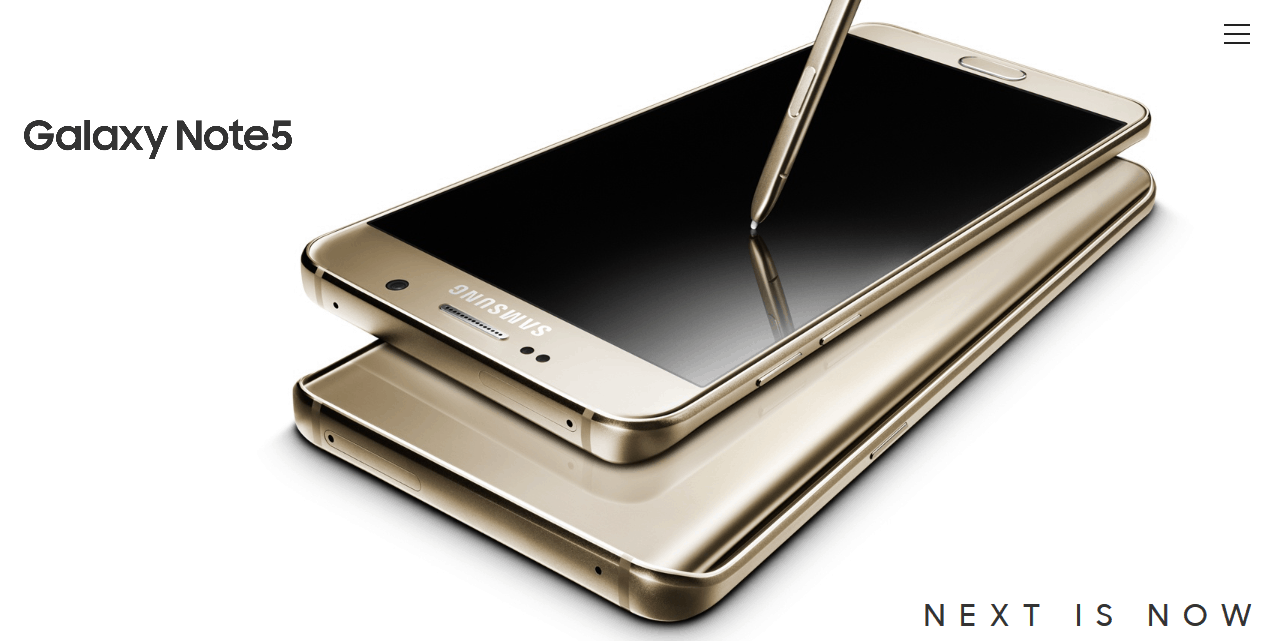 Anyone who follows TechVise knows that I’m not a big Samsung fan. I think they copy too much from Apple, and I find a lot of their apps meaningless and their design cheap. Well, I have more or less eaten my words with the new Samsung Galaxy Note 5. Not only has Samsung created a device that significantly improves upon the Note 4 from last year, but it has also set a whole new standard for smartphones as a whole.

The first thing anyone will notice about the Galaxy Note 5 is its stunning design. I’ve blasted Samsung for it in the past, and they made some nice improvements with the Galaxy S6. The Note 5 though is a truly refined phone, and it is gorgeous. The front and back are both glass and the phone has a very nice metal rim. This gives the phone a much more premium feel than previous Samsung phones. It also has a curved back that gives it a natural hold in the hand. The Galaxy Note 5 is a little slippery, though, so you will want to be careful carrying it. The phone has a decent speaker on the bottom (which I guess is better than on the back). It still reminds me a lot of the iPhone speaker, though.

The display is a 5.7″ Quad HD Super AMOLED screen. It’s big, bright, and beautiful, just what you would expect from the Galaxy Note 5 and Samsung in general.

The big thing to talk about with this year’s model is the newly improved S Pen. For one, it has been further integrated into the phone. The pen is locked into the phone, and you can release it by just clicking on it, and the pen will slide out. The pen is a little weightier than last year, which gives it a more natural feel. The writing has also been considerably refined. The S Pen software can also better recognize handwriting, even if you are sloppy at writing (like I am). A cool new feature is the ability to write on the phone without turning it on. By just removing the pen and touching the screen, you can take notes quickly without ever turning the screen on or entering the S Note app. Your note will automatically be saved when you replace the pen in its proper place.

Needless to say, the specs are pretty impressive on the Galaxy Note 5. The Note series has always been a specs powerhouse, and the Note 5 is no different. The phone comes packed with Samsung’s own Exynos 7420, which is comparable to the Snapdragon 810. The phone is also one of the few to come with 4 GB of RAM, which makes multi-tasking and daily operations smoother and faster. The standard model comes with 32 GB of memory, which is pretty typical for the Note series at this point.

The camera is just as impressive as always. The 16 MP camera works in nearly all conditions, and it has some of the best quality on the market. It is the same as the one found on the Galaxy S6, so feel free to read more about the camera here. A 5MP lens powers the front facing camera.

The battery is the only real disappointment with the Galaxy Note 5. It has a 3,000 mAh battery, which is smaller than last year’s model. This means the battery life has significantly dropped. Samsung has tried to combat this by integrating fast charge technology as well as Qi wireless charging in Note 5 so while the battery doesn’t last as long, at least you don’t have to plug it in or wait as long for it to charge.

Honestly, this is the first time I’ve been impressed with Samsung. They have crafted (yes, crafted!) a truly impressive phone. It looks amazing; it runs incredibly well, and it truly shows off why Samsung is at the top of the Android market. The unlocked international version of the Galaxy Note 5 comes in at $540. Besides a weaker battery and slippery hold, there isn’t anything complain about.