Forge – An Artist’s Paradise on iPad 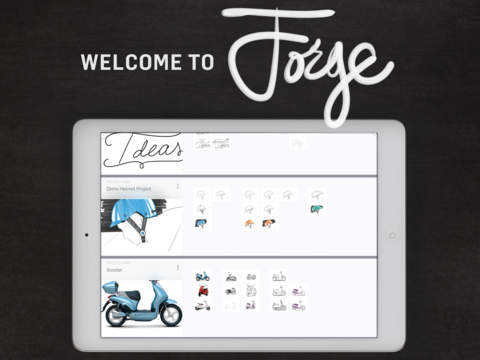 I have always been a bit weary of sketch apps on tablets and smartphones. Perhaps it is my total lack of artistic ability, but I just don’t see how any legitimate artist would use an iPad over an actual sketchbook. It seemed like a gimmick to me, and I thought surely that there would never be a quality sketch app that would justify using it over the traditional pen and paper. That is, until Forge came out. Forge is an intuitive and deep app that has a lot of cool and unique features for making quick sketches on the go. It doesn’t necessarily beat out pen and paper, but it is a step in the right direction for digital art.

Forge is an app from stylus creator Adonit. It is the first app produced by the company, and as of this review it is only available on iPad. The service is unique because, for a sketch app, it is rather in depth and it offers a lot of very cool features that artists will absolutely love. It isn’t perfect by any means, but it is by far the best sketch app I have ever seen.

One thing I liked about Forge is how simple it is to use. This also detracts from it slightly, but more on that later. Jumping into the app, I knew exactly how it worked and what to do. Upon initial launch, the app does an excellent job explaining its pinch features, as well as how the wall works and how to organize and curate your work. It comes with six pretty basic options: pencil, pen, paintbrush, marker, airbrush, and eraser. All of these options can adjust their gradients and palette to get the exact style you want. It is also simple to use, and I never once had an issue figuring out how to do something. And that’s saying something, because I know as much about art as I do about rocket science.

The Wall is also very streamlined and easy to use. Each sketch a user makes can be saved under one project (the free version allows users to save 2 Projects, after that a one time charge of $3.99 will allow users to have unlimited projects). These sketches can be viewed, organized, and curated all from the wall. It is pretty simple and intuitive. The overall design of the app is just superb.

Layers also added an interesting element to the sketching. Essentially, users can sketch in one of five layers on a single sketch. This allows them to work on certain aspects of a piece without it affecting the rest of it.  Once all of the layers are complete, you can reveal them all at once to reveal a singular and often times impressive drawing. It’s a handy feature, and it certainly improved my work (refer to the images located below).

Unfortunately, not everything is perfect, and Forge does have its drawbacks. For instance, you can’t copy sketches or layers. This may not seem like a big deal, but when you want to recreate a similar style or theme among your sketches, this is essential. Rather than trying to recreate the desired layers, it would be much easier to copy and paste them. A more thorough zoom would also be nice. As of now, you can only view all of the sketches at once. It would be nice to be able to compare just two sketches in a zoomed view to get a better view of the subtle differences. All in all, it is seemingly minor overlooks like this that keep the app from being all around perfect.

That being said, I really enjoyed Forge and I plan on using it for a long time to come. It works best with the JotTouch stylus from Adonit, but any stylus or even your finger will work with it. If you are looking for a powerful and legitimately useful sketch app to replace your pen and paper on the go, then Forge is the app for you.