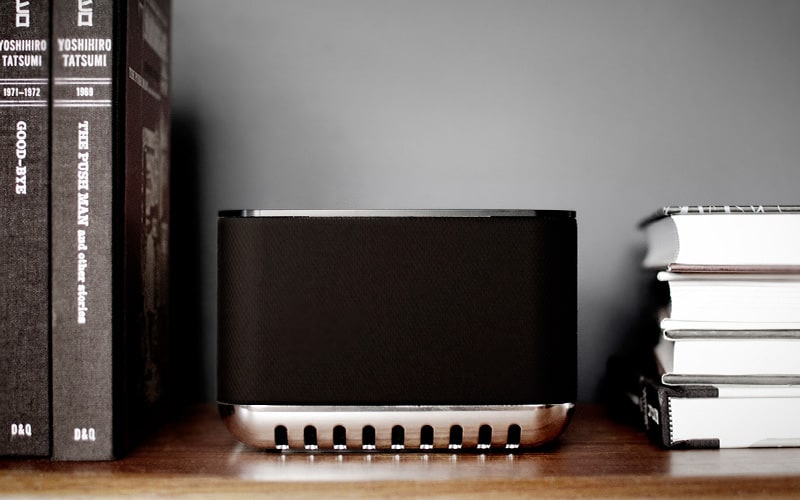 Bluetooth speaker systems are becoming more and more relevant in home system makeups. Wires and cables are becoming things of the past, but wireless speaker systems have their limitations. For one, many of them have terrible battery lives (like mine, for instance, which lasts about three hours). Wireless speakers also tend to be on the small side, which means they don’t fill up space nearly as well as a full-blown speaker. Products like the Beat Pill and UE Boom are robust systems, but they lack the encompassing feel of a stereo system. Now, with the new Core Wireless Speaker System by Mass Fidelity, all of these ails are remedied. But can its advanced design and big sound make its equally significant price worth it?

The first thing you’ll notice about the Core wireless speaker is that it is small, really small. The sleek little black box fits comfortably in one’s hand, and its subtle yet elegant design lets the speaker easily blend into any room or setting. The little speaker is 6″ tall and 6″ wide, which means it is smaller than the average stack of paperback books. The speaker’s chrome base also gives it a distinct and polished aesthetic. On top of the box are the volume keys as well as the Bluetooth key and the shared connection button (more on that later). The back of the box holds the inputs for its AC adapter, a USB port, as well as AUX and SUB-OUT inputs.

Overall the Core is a lovely looking device if it is a bit bare bones. Aside from the chrome base, the speaker doesn’t stand out much from its competition.

One of the things Mass Fidelity champions about the Core is its premier specs, and they certainly have the right to brag about it. Technically, the Core is an impressive little machine. For starters, the Core has a whopping 12-hour battery life. That’s more than most phones get, and four times as much as my current Bluetooth speaker gives me. That in and of itself makes the Core an attractive option. It doesn’t end there, though. The Core also uses Bluetooth 1 technology, which is another way of saying that it has the best of the best components. With Bluetooth 1 you won’t have to worry about irritating dropouts in connection.

The biggest selling point of the Core wireless speaker system is its ability to fill a room and imitate an actual stereo system. The Core accomplishes this through something called Acoustic Holography technology, which (as far as I understand it) recreates the feeling of a stereo system by projecting it outward in different directions. It’s a hologram for sound. If that sounds like gibberish, don’t worry. The point is it sounds like (if not better than) a stereo, and several reviews confirm this idea.

Another unique thing about the Core is its 5GHz dedicated network. You can connect up to 8 Cores with the single press of a button (the one mentioned earlier), and they will instantly connect and run on their network, which means they don’t need to connect to Wi-Fi or take up any bandwidth. That’s pretty impressive, and it indeed gives the Core the potential to be a home wireless system and not just a Bluetooth speaker system like many others out there.

The Core also doesn’t require a dedicated app to operate. While I haven’t used a speaker that needs an app, apparently it is fairly common. With the Core wireless speaker, you just connect and play whatever you want from the music streaming app.

The Core also functions as a soundbar. The little speaker can be plugged directly into a TV or Apple TV to provide killer sound. This is ideal for people who want big sound from their television without going through the hassle of setting up a large soundbar.

The Core wireless speaker by Mass Fidelity has a lot going for it, and I mean a lot. It is small, has an excellent battery life, and stellar new technology that gives the feeling of stereophonic sound. What’s not to like about it. Well, the price. A single Core will run you $600. That’s nearly three times the regular competition and twice as much as a mid-range soundbar. That’s a lot of money for something so small. That impressive sound could be well worth it to some, though. For those of you looking to find the absolute best in wireless music, look no further than the Core. Just be prepared to pay for it.

Best Wireless Bluetooth Earphones for Everyone

Great Earphones & Headphones for Every Occasion